【Important】Change of appearing artists and program for the 631st Subscription Concert scheduled on October 23 and 24. 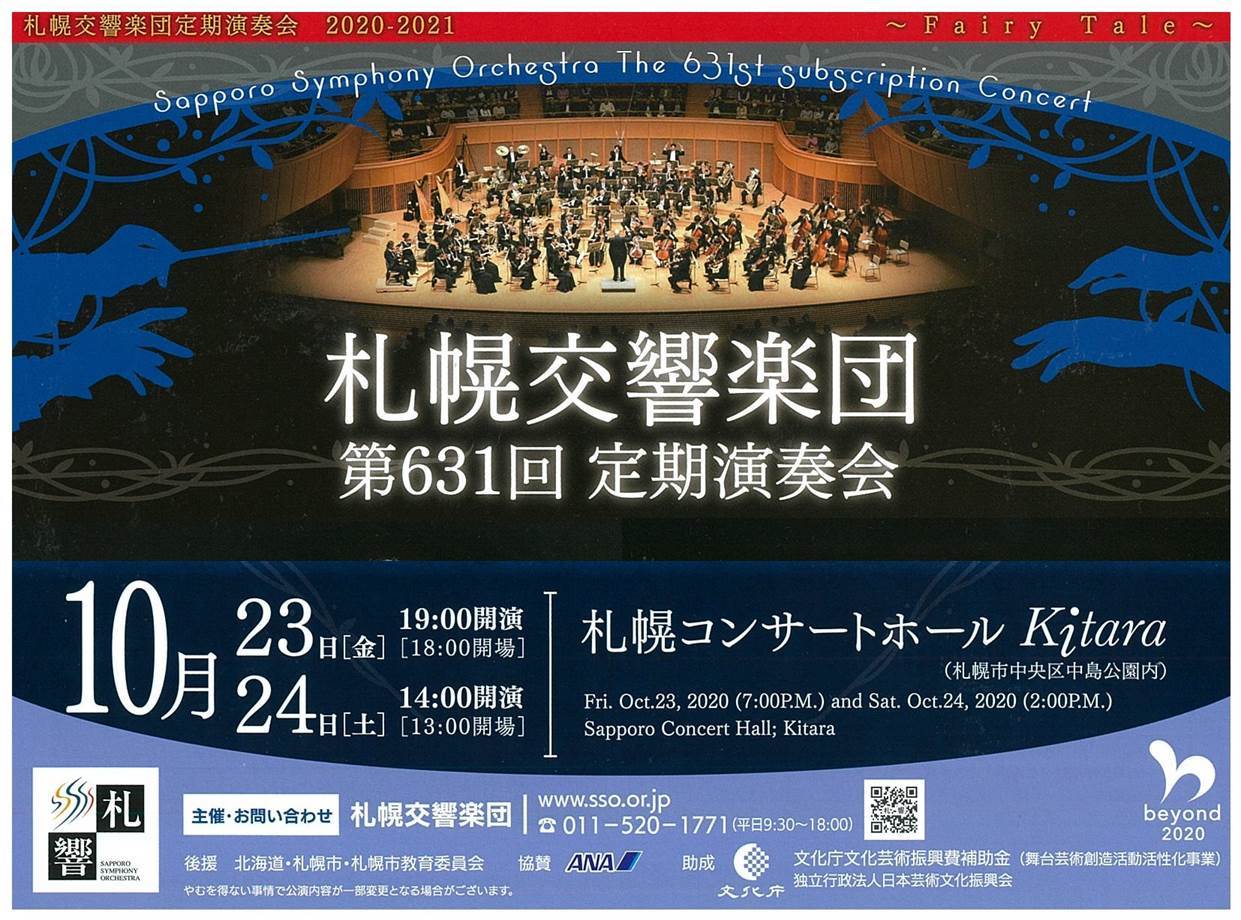 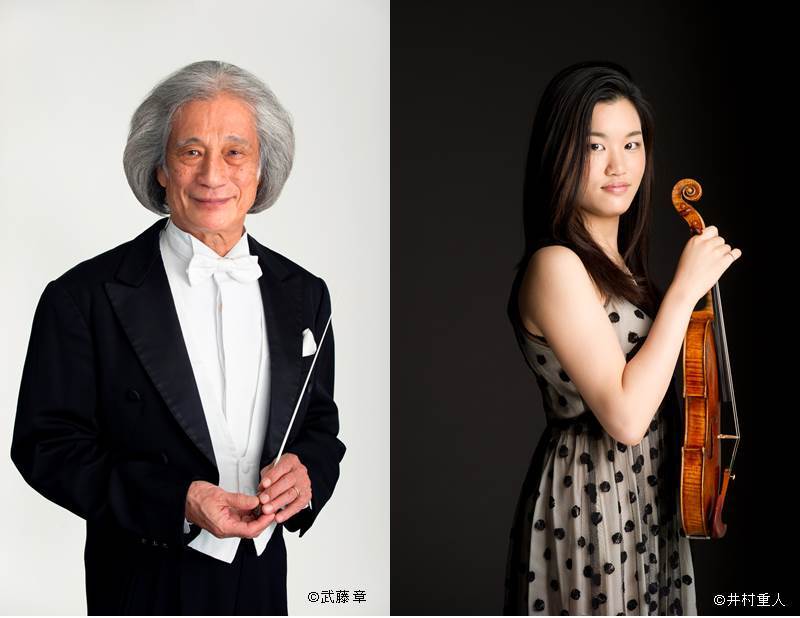 Mo. Dmitry SITKOVETSKY, conductor and violin, who were to be with us for the 631st Subscription Concert scheduled on October 23 and 24 is unable to arrive in Japan due to immigration restriction.

Program is to be changed as follows:

There will be no change on the date or time.

We thank you for your understandings.

Taijiro Iimori is one of Japan's most distinguished conductors, widely respected for his broad repertoire and particularly as a strong advocate of Wagner． After receiving his musical training at the Toho Gakuen Junior College, Mr.Iimori made his opera debut with a production of Puccini's Suor Angelica by the Fujiwara Opera Company, thus beginning a career strongly associated to the world of lyric theatre. He went on to win prizes at the Dimitri Mitropoulos International Music Competition for Conductors (1966), and at the First Herbert von Karajan International Conducting Competition (1969). Taijiro Iimori currently holds the positions of Artistic Director of Opera at New National Theatre Tokyo(NNTT), as well as Chief Conductor at the Sendai Philharmonic Orchestra, and Honorary Conductor Laureate at the Tokyo City Philharmonic Orchestra and the Kansai Philharmonic Orchestra. As Principal Conductor at the Tokyo City Philharmonic Orchestra (a post he held from September 1997 to March 2012) and the Kansai Philharmonic Orchestra (from January 2001 to December 2010), he has been praised for his exciting programming in both cities. Highlights include a semi-staged version of Wagner's Ring Cycle and performances of the complete works of Beethoven. Also as Principal Conductor of the Nagoya Philharmonic (from April 1993 to March 1998), he earned the Agency for Cultural Affairs' 1996 Arts Award for a live recording of the Philharmonic's 30th Anniversary Concert in Tokyo. Taijiro Iimori has been active in Europe, particularly in Germany, where he held various posts, notably at the Richard Wagner Festival in Bayreuth where he has been a musical assistant from 1970 until 1992. He was active in opera houses such as Bremen and Mannheim as conductor and pianist. During this time he won the Education Minister's Art Encouragement Prize for Freshmen in Tokyo (1972), the prize for ‘Best Conductor of the Season' in Barcelona Gran Thetro del Liceu, Spain (1972). In the same year he conducted the Vienna Symphony Orchestra at the Vienna Festival and a year later was invited to the Teatrocomunale di Bologna. He went on to hold posts as Resident Conductor at the Hamburg State Opera. From 1978 to 1983 he was principal conductor of the Opera Forum Enschede in Holland, where he was also active as a conductor of the Enschede City Conservatory Orchestra until 1995. Taijiro Iimori has totally 21 various recordings, mainly on Fontec. Among them, eleven with the Tokyo City Philharmonic Orchestra (including two versions of Beethoven the complete symphonies), two with Kansai Philharmonic Orchestra, two with the Nagoya Philharmonic orchestra, two with Tokyo Metropolitan Symphony Orchestra,all of which have been received to great acclaim: his recording Bruckner Symphony No. 4 was one of Gramophone Japan's March 2000 Critic's Best Choice 3. Taijiro Iimori is the recipient of numerous citations, including the 32nd Suntory Music Award (2001), the 54th Arts Encouragement Prize of the Minister of Education (2004), Japan's Medal with Purple Ribbon(2004), 43rd Osaka City Cultural Contributor Award(2008), Japan Art Academy Prize (2013), 56th Mainichi Art Awards (music division, 2015). In 2010 he awarded the Order of the Rising Sun, Gold Rays with Rosette, the highest honor in Japan. He has been named Person of Cultural Merits of Japan in 2012, and a member of the Japan Art Academy since 2014.

Violinist Naoka Aoki, who won second prize at the Long- Thibaud-Crespin 2014 and she also got a special prize of the Prince Albert Ⅱ of Monaco (for the best interpretation of the concerto). She also won second prize at the 4th China International Violin Competition(Qingdao) in 2014. Born in Tokyo in 1992, she started playing the violin at the age of 3 and she has achieved many prizes in Japan including a special diploma from the Tchaikovsky Competition for Young Musicians 2004 and 1st Prize and three special prizes at the 78th Music Competition in Japan. She pursued the Soloist Diploma Course at the Toho College of Music in Tokyo as the youngest student from 2009 to 2011, studied with Prof. Masafumi Hori. From 2011 to 2015, she studied at the Royal College of Music under Prof. Mark Messenger as a Heather Laverne Scholar supported by Ian Stoutzker Prize, with additional support from the Rohm Music Foundation from 2011 to 2013. She is currently studying at the Royal Academy of Music under Prof. Mayumi Fujikawa as an ABRSM full scholarship student. She also regularly attends master-classes with Prof. Ana Chumachenco since 2010 including Kronberg Academy and International Music Academy Lichtenstein. Her debut was playing Paganini Violin Concerto No.1 with NHK Symphony orchestra. Later she got opportunity to play with the Orchestra Emsemble Kanazawa, Tokyo Symphony Orchestra, Tokyo Philharmonic Orchestra, Kanagawa Philharmonic Orchestra and Osaka Philharmonic Orchestra. She performed at various places as a soloist including Suntory Hall, Tokyo Opera City Concert Hall, Tokyo Bunka kaikan and Hamarikyu Asahi hall in Japan. As a chamber musician she also played various places in London including Wigmore Hall, Royal Albert Hall, Cadogan Hall, Bermingham Town Hall and Chipping Campden Festival. She also had a recital in France, including Music Festival in Basque, series of Le Pont des Arts(Normandy) and Music Site in Bordeaux Recently she has received the Tagore Gold Medal from HRH Prince of Wales at the Royal College of Music where she graduated in 2015, she awarded as it the highest honor to give the most generally deserving student. She also won 3rd Prize at the 6th Sendai International Music Competition in June 2016.