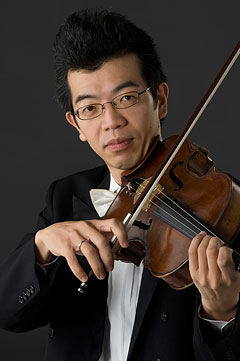 As a soloist, Hirokari performed with Hiroshima Symphony Orchestra and Sapporo Symphony Orchestra and appeared in Kiso Music Festival and Kurashiki Music Festival. He held solo recitals in 2004, visiting 3 cities and in May 2009 visited 2 cities, all well received. As a soloist for the Sapporo Symphony Orchestra Subscription Concerts, he played works of Japanese composers including Hikaru Hayashi and Toru Takemitsu. In 2005, he appeared as a soloist for Bartok’s Viola Concert and in May 2009 for R. Strauss’ “Don Quixote” all impressive. He is one of the outstanding violist today in Japan, with his rich and refined tone which sharply lead to the essence of the music.