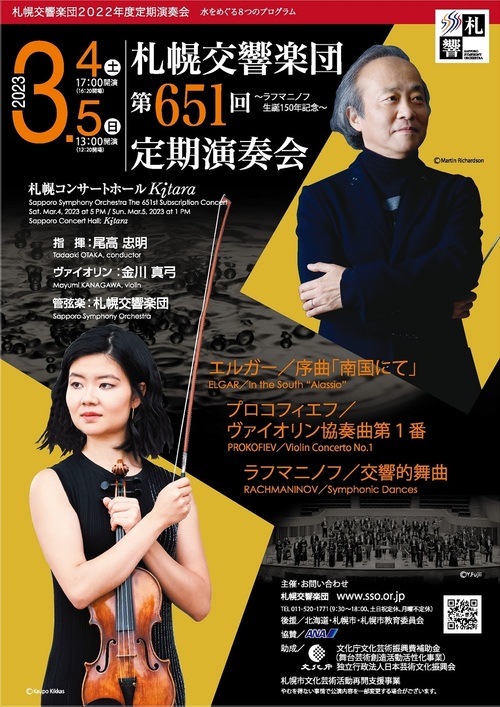 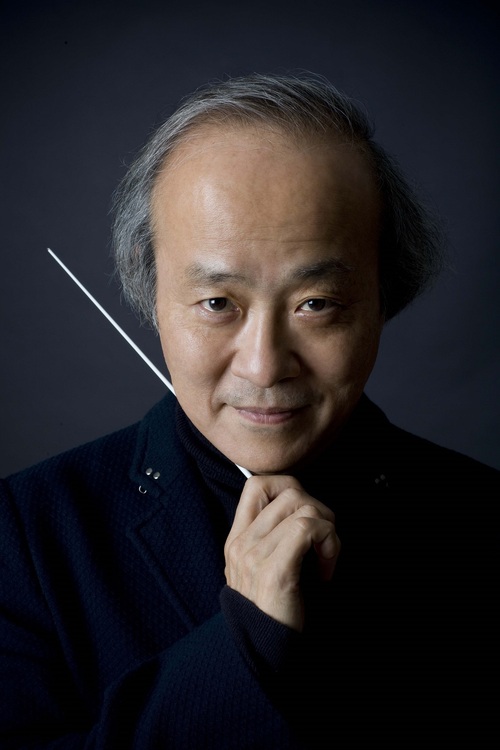 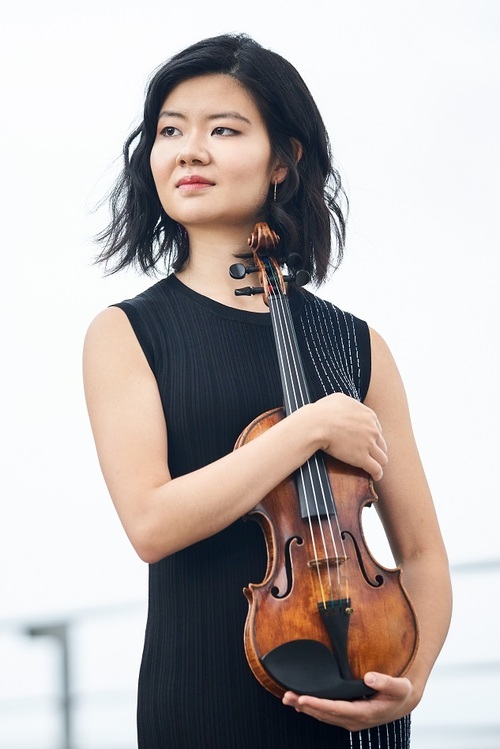 【Single Tickets】will be on sale starting Wednesday, December 7, 2022 from 10am

～The last concert of 2022 season Water ～ To celebrate the 150th anniversary of Rachmaninoff Birth in 2023, we will conclude the season of “Water” with Mo. Tadaaki Otaka and his Symphonic Dances. This work is so emotional and it would surely grab one’s heart deeply. Otaka who has received Elgar medal from Great Britain also introduces Elgar - In the South, "Alassio.” We will also invite Ms. Mayumi Kanagawa who shows amazing musicality and technique. ●This concert will be held following the guidelines in prevention of COVID-19 infection. Details of our action is announced on our website. The concert may be cancelled or changed in case of breakout of COVID-19. ●There will be no refund of tickets unless the concert cancelled due to force majeure. Please consider your body condition when purchasing the tickets of the concerts. (as of January 2022) 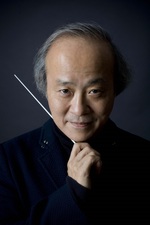 Tadaaki Otaka was born in 1947 in Kamakura, Japan. He studied at Toho Gakuen School of Music under the famous professor Hideo Saito, who taught such distinguished conductors as Seiji Ozawa and Hiroshi Wakasugi, before continuing his studies in Vienna with Professor Hans Swarowsky and Professor Spannagel. One of Japan’s leading conductors, Mr Otaka made his professional broadcasting debut in 1971 with the NHK Symphony Orchestra and for 20 years served as Permanent Conductor of the Tokyo Philharmonic Orchestra, with which he toured extensively in Asia and Europe, being made the orchestra’s Conductor Laureate in 1991. In September 2012, he toured with the NHK Symphony Orchestra to China (Beijing, Shanghai and Tianjin) to commemorate 40 years of the normalization of diplomatic ties between Japan and China. In addition, he was Chief Conductor (1981 to 1986), Music Advisor and Principal Conductor (1998 to 2004) and Music Director (2005 to 2015) of the Sapporo Symphony Orchestra, and became their Honorary Music Director in April 2015. He led their UK tour in 2001 and Korea tour in 2005 successfully. Following his tenure with the Tokyo Philharmonic, Mr Otaka was made Permanent Conductor of the Yomiuri Nippon Symphony Orchestra from l992 to 1998 (currently Honorary Guest Conductor) and his symphonic and operatic recordings with the orchestra brought much critical acclaim, as did their European tour. He also served as Principal Guest Conductor for the Melbourne Symphony Orchestra (2010 to 2012) and as Artistic Director of the Opera Division for the New National Theatre, Tokyo (2010 to 2014). He acted as Music Adviser of the Osaka Philharmonic Orchestra from April 2017 to March 2018 and started his tenure as Music Director of the orchestra in April 2018. Now a popular and familiar figure on podiums throughout the world, he is particularly known in the UK, where he is invited as Guest Conductor to the London Symphony, London Philharmonic, BBC Symphony, City of Birmingham Symphony, Royal Liverpool Philharmonic, Royal Scottish National, Hallé, Bournemouth Symphony, Ulster Orchestra and English Chamber Orchestra. In 1987, Mr Otaka became Principal Conductor of the BBC National Orchestra of Wales (formerly the BBC Welsh Symphony Orchestra) and made his Prom debut with them the following year. To quote London’s Sunday Times: “In his eight years with the orchestra Otaka had worked wonders in Wales.” His many appearances in UK and overseas include BBC NOW tours to European countries, Russia, and the Orchestra's first-ever Japanese and North American visits. Outside the UK, he has received invitations to the Berlin Radio Symphony Orchestra, Frankfurt Radio Symphony (hr-Sinfonieorchester), Brussels Philharmonic, Rotterdam Philharmonic, Bamberg Philharmonic, Strasbourg Philharmonic, Warsaw Philharmonic, Bergen Philharmonic, Oslo Philharmonic, Netherlands Philharmonic, Hong Kong Philharmonic and others. He was recently invited to conduct the Île-de-France National Orchestra for their season opening subscription concert at the brand new hall Philharmonie de Paris in October 2016. In 2017, Mr Otaka and the BBC National Orchestra of Wales held a special concert to celebrate 30 years of collaboration. Mr Otaka is the first ever Music Adviser and Principal Conductor of the Kioi Hall Chamber Orchestra Tokyo, one of Japan’s finest ensembles, and after leading them on their first overseas tour of Europe in 2000, became their Honorary Conductor Laureate in September 2003. In the field of opera production, he has received high acclaim for his direction of Britten’s Peter Grimes with Sapporo Symphony Orchestra in September 2008. Other productions of his include Beethoven’s Fidelio, J.Strauss II’s Die Fledermaus, Puccini’s La Tosca, Wagner’s Tannhaeuser with Tokyo Nikikai Opera Foundation; Bizet’s Carmen, Weber’s Der Freischuetz with Kansai Nikikai Opera Foundation; R.Strauss’s Salome with Wales National Opera; and Britten’s Peter Grimes with Yomiuri Nippon Symphony Orchestra. Mr Otaka’s wide-ranging activities include premieres of works by such distinguished composers as Teizo Matsumura, Toru Takemitsu and Akira Miyoshi, many much-praised recordings with BBC NOW by Nimbus, BIS, Chandos and Camerata Tokyo, and his dedication to nurturing future talent led to involvement with the National Youth Orchestra of Britain and the Britten-Pears Orchestra of which he was Director for three years. In 1991, Mr Otaka received the prestigious Suntory Music Award, given each year to the most impressive Japanese ensemble or individual musician. In 1993, the Welsh College of Music and Drama conferred an Honorary Fellowship on Mr Otaka, and he also holds an Honorary Doctorate from the University of Wales. In 1997, he was awarded the CBE, in recognition of his outstanding contribution over many years to British musical life. He is also the first Japanese ever to receive the Elgar Medal in 1999, for his continuous efforts at spreading the works by Elgar outside the UK. Currently Mr Otaka is honorary professor of the Tokyo University of the Arts, visiting professor of the Soai University and the Kyoto City University of Arts and guest professor of the Kunitachi College of Music. •Music Director --- Osaka Philharmonic Orchestra •Permanent Conductor --- NHK Symphony Orchestra •Conductor Laureate --- BBC National Orchestra of Wales •Honorary Music Director --- Sapporo Symphony Orchestra •Conductor Laureate --- Tokyo Philharmonic Orchestra •Honorary Guest Conductor --- Yomiuri Nippon Symphony Orchestra •Honorary Conductor Laureate --- Kioi Hall Chamber Orchestra 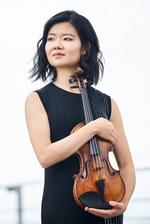 Mayumi Kanagawa is a Berlin based, Japanese-American violinist known for her rich, dark sound and focused, engaging musicality. Prizewinner at the 2019 Tchaikovsky Competition in Moscow and 2018 Long-Thibaud Crespin competition in Paris, she is establishing herself as a soloist and chamber musician in Japan, Europe, and North America. The 2021-22 season opened on tour with the NHK orchestra in northern Japan, followed by her debut in the Berliner Philharmonie playing Brahms concerto with Marc Piollet. Other engagements include a Wigmore Hall recital, debut with the Konzerthaus Orchester Berlin, as well as reengagements with the Tokyo Metropolitan and Yomiuri Nippon Symphony Orchestras. Mayumi has performed with many orchestras including the Mariinsky Orchestra, Belgian National Symphony, Prague Radio Symphony Orchestra, Deutsche Kammerphilharmonie Bremen, Finnish Radio Symphony Orchestra, NHK Symphony Orchestra, among others. Her unique talent for communicating the love and joy of music making in varied repertoire and venues have also brought her to many outreach programs and schools around the world, from San Francisco to Novosibirsk. Mayumi’s musical education has been shaped by Kolja Blacher, Yoshiko Nakura, Masao Kawasaki, and Robert Lipsett. She currently performs on a Stradivarius 1725 Violin “Wilhelmj,” on generous loan from Nippon Music Foundation.